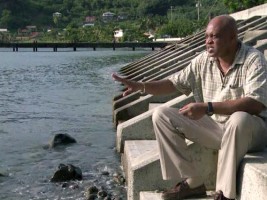 Six Caribbean nations have featured in a television series on the dangers of climate change, created by the Organisation of Eastern Caribbean States (OECS).The 12-part series aims to highlight the impact of climate change and solutions among the general public, and will be broadcast across the Caribbean and beyond, from next month.

The OECS, based in St Lucia, worked with a local production company to source footage and case studies from the island, as well as from Antigua and Barbuda, Dominica, Grenada, St Kitts and Nevis, and St Vincent and the Grenadines. Over 40 people were interviewed around themes ranging from disaster preparedness to impact on food security. It was the first time the inter-governmental body has created a TV series.

The series, Understanding Climate Change, is part of the awareness component of a USAID-funded climate change project in the region. The director-general of the OECS, Dr Len Ishmael, stressed the importance of providing essential information about climate change to Caribbean island nations: “The fact that we are so small means that we are exceptionally vulnerable; we can expect so much more of the very worst that weather brings with it,” he said.

Each of the five-minute episodes focuses on a different facet of climate change challenges. Tecla Fontenard, from communications at the OECS said: “At the end of each episode there is a call to action specific to the focus of the programme. For example, in Challenges to Fresh Water, we provide tips on how people can conserve water. In Promoting Youth Involvement, we provide ideas on how they can get involved in climate change solutions.”

Fontenard said that the programme’s booked-out launch earlier this month in Castries, St Lucia had been “very exciting”. She said: “Since the launch, we have had enquiries on the series from all across the globe, the French Antilles, UK, Belize, Barbados, and [other] OECS states.”

The OECS is currently negotiating with a regional satellite distributor to uplink the series for broadcast by the top two or three TV stations in each of the participating states, with a view to distributing it to selected TV stations in other nations of the Caribbean Community. The following networks have been announced for transmission so far:
Antigua & Barbuda, ABSTV; Dominica, Marpin 2K4 TV, SAT TV; Grenada, GBN (CBA member), MTV, CC6; St Kitts & Nevis, ZIZ (CBA member), St Lucia, DBS, HTS, Choice TV; and St Vincent & Grenadines, SVG Broadcasting (CBA member).

In the Caribbean, the CBA works with TV and radio broadcasters in Grenada, St Kitts & Nevis, Bahamas, Barbados, Guyana, Jamaica, and Trinidad & Tobago. We are about to launch an online distance learning course for employees of member organisations that focuses on the role of the media in relation to disaster and emergency.