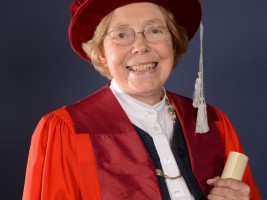 We congratulate Elizabeth Smith, CBA Secretary-General from 1994 to 2010, who has been awarded a Doctor of Letters for services to broadcasting. The honorary degree was given by the Faculty of Media, Arts and Design at the University of Westminster, in London.

Elizabeth Smith said she was honoured to received the award, especially from a university with such a strong reputation in the media world. In her acceptance speech, she talked about how much had changed in broadcasting during her career, and what threats and opportunities she saw for public media in the future.

“Public Service Broadcasting  is now under great strain in many parts of the world.  But it is essential that even if the existing institutions change out of all recognition, the core ethos of PSB should survive,” she said.

Smith added: “Rather than existing to sell products or serve the government, the objective of PSB  is to serve the public.  This is harder and harder to achieve in a world of personalised media. It is the new generation of broadcasters who will have to make this into a revolution for the good of the people, not one which turns a blind eye to the harm it makes possible.”

Elizabeth Smith is a former controller of English Programmes and previously head of Current Affairs for the BBC World Service. She now runs Transforming Broadcasting, through which she has provided advice and consultancy on PSB for countries including Namibia, Sierra Leone, Lesotho, Bhutan and Libya.

This entry was posted in Latest and tagged CBA President, University of Westminster.