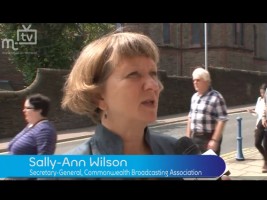 Sally-Ann Wilson, the Secretary-General of the CBA, has given spoken evidence to a select committee on Public Service Broadcasting from the Isle of Man’s parliament, the Tynwald.

A committee to examine the future of public broadcasting on the Isle of Man was set up at the end of last year, and the views of residents and experts are being compiled. At the time of setting up the committee, the Tynwald reaffirmed its commitment to public service broadcasting in the Isle of Man and recognised Manx Radio as the national broadcaster.

Manx Radio is a CBA member, and Sally-Ann Wilson talked about why it is such a good example of a Public Service Broadcaster and the implications that this situation has for PSB everywhere. She told Manx TV after giving evidence: “We’re aware there are many practices of Manx Radio,  from it being the national broadcaster, that actually would translate very well and be a great example for other broadcasters to aspire to… [they] could benefit from seeing how well social media and new media works alongside radio, with radio actually being a driver for social media.”

Ms Wilson continued: “I have been honest with the select committee in giving a global perspective… many of the questions didn’t relate just to Manx Radio, they related to other structures of other broadcasters globally. We’re here to represent the interests of Public Service Broadcasters.”

She likened the role of a Public Service Broadcaster to “cultural glue” and that if the nation and the public acknowledged the need for this, then it must be effectively funded.

This entry was posted in Latest and tagged Douglas, Isle of Man, Manx broadcasting, Manx Radio, Members of the House of Keys, radio, select committee, Tynwald.