As Sierra Leone declares a public health emergency in response to the Ebola outbreak, we have contacted our member broadcasters in West Africa to support them and hear how they are responding to the crisis. The role of public broadcasters as trusted information sources in emergencies has always been a key focus for the CBA.

The outbreak of the virus is said to be the worst to date, and since February this year it has claimed 729 lives in Guinea, Sierra Leone, and Liberia; and includes one death in Nigeria. Ebola kills up to 90 per cent of those who contract it. Transmitted by human contact with infected animals such as monkeys, apes and fruit bats, it spreads between humans via contact with bodily fluids of infected individuals, and even funeral rites for victims such as washing the body of the deceased pose risks. 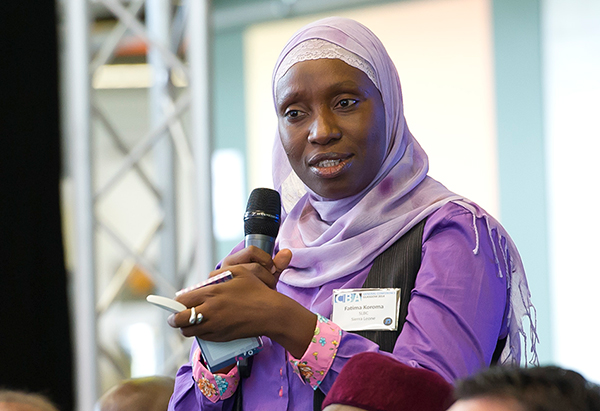 Therefore containment and prevention is paramount, but the challenge for the media and health services balancing the need for warnings and information against causing panic. In Sierra Leone’s capital, Freetown, Fatima Koroma, marketing director at Sierra Leone Broadcasting Corporation said the virus outbreak was causing a lot of fear, particularly in densely populated Freetown.

She said the broadcaster, a CBA member, was now running dedicated daily one-hour news and current affairs slots on Ebola. “Medical experts, staff from the Ministry of Health and other institutions are invited daily for the discussions,” she added.

Fatima Koroma (left, at the CBA conference this year) continued: “SLBC also broadcasts a one-hour documentary on Channel 1 and 2 daily in order to strengthen the sensitisation campaign on Ebola, called ‘The Plague Fighters’.” She said that SLBC was providing other civil society organisations the use of their networks in Freetown and regional areas to air jingles and discussion programmes.

Other members, such as Channels TV in Nigeria, are leading the way in ensuring in-depth factual coverage of the outbreak and reminders that the disease can only be passed on by contact, and not through the air, or breath. Coverage emphasises that people who have the virus are clearly sick “they are not walking around in the market or the barber shop” as the doctor interviewed in the Channels report (right) points out. Daar Communications in Abuja is running a Q&A from a BBC health reporter on its website to help combat misinformation.

Elsewhere in West Africa, Ghana has not had a case within its borders, but is on high alert. The national broadcaster and CBA member Ghana Broadcasting Corporation said it is actively involved in educating the public on the disease – its symptoms, how it is spread and how to avoid contracting it. GBC said it was running a “rigorous” campaign through the news, discussion shows and special programmes on both radio and TV, not only in English but also in the local languages. It is monitoring the situation across the country through GBC correspondents in all regions.

Quick action, coordination and timely information are crucial for containing outbreaks of diseases such as Ebola, with public TV and radio playing an essential role in disseminating credible news and information. We devoted our 2012 conference to disaster preparedness for broadcasters, and more recently we have provided specific training for members on broadcasting during health emergencies.

The need for accurate information on Ebola is acute in the region, where it is largely unknown. The latest outbreak started in Guinea, a West African country with no history of the virus. Past outbreaks have almost wholly been confined to central Africa. The World Health Organisation has described the epidemic as “unprecedented” due to the geographical spread of the cases and the number of countries simultaneously affected.