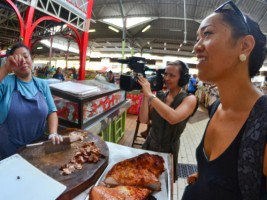 A year in broadcasting around the world: CBA’s activities in 2013

It has been another well-travelled year in the world of broadcasting for the CBA Secretariat team. Some of the highlights of our year include…

Documentary training work in the Pacific. With our partners, we ran an intensive 11-day documentary filmmaking  course in Tahiti in February. We worked with the Pacific Media Assistance Scheme, the Australian Film, Television and Radio School; the Oceania Film Festival; and Macquarie University Australia to train 15 talented and ambitious filmmakers from eight Pacific nations as part of the Pan-Pacific Digital Media Project.

Leading a pandemic broadcasting workshop in Indonesia. The special one-day workshop, ‘Be Prepared! Managing your organisation through a global pandemic’ was part of the Asia Media Summit in Manado. It was attended by over 30 participants representing broadcasters across Asia. Delegates at the workshop said they appreciated the timely training in media preparedness in disasters, which took place in May this year, when the new bird flu virus and coronavirus were again making headlines.

Going digital in the Caribbean. We organised a special conference in Guyana, attended by broadcasters from 15 Caribbean countries. From DTT standards to multiplatforming, the region’s TV and radio networks met to talk about the challenges and opportunities of digital. It was a unique opportunity for broadcasters in a part of the world contemplating four different digital TV standards to openly discuss them and directly question TV standards representatives.

Publishing a ‘New World View’. As part of our WorldView project, which seed-funds international documentaries, we researched the role that PSBs play in providing citizens with reliable and engaging international coverage. Documentary storytelling is a crucial part of this, helping contextualise the news. We argued how such content can empower audiences to make informed democratic choices. Download the report.

Giving evidence at the world’s oldest parliament. The Tynwald, the legislature for the Isle of Man, is said to have existed for over a millennium. It was the setting for a review of the nation’s Public Service Broadcasting. Sally-Ann Wilson, the CBA Secretary-General, gave spoken evidence to a parliamentary committee at the Tynwald. She talked about the value of CBA member Manx Radio as a PSB and in particular, its important and ongoing role as a driver for social media.

Image: Maria Tanner, right, from the Cook Islands working on her documentary on the Pan-Pacific Digital Media Project

This entry was posted in Latest.